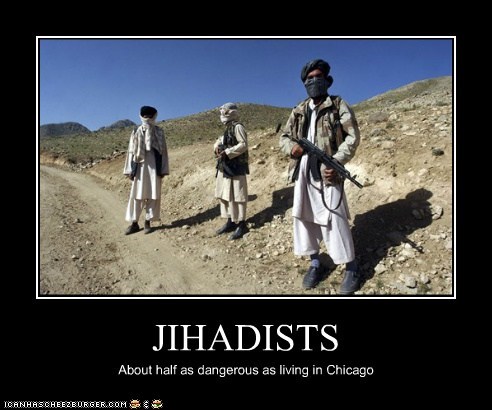 …it’s the only way to be sure.

Nestled amid this provocative collection of rare photographs from Saipan (h/t: Ace) are two links also about the subject of the horrors of war:

In the moral scheme of how we fight, urinating on corpses is not acceptable. It is unchivalrous, ungallant, whatever you want. But we need to remember, as Bill Maher reminds us, how inhuman our enemies are. Not because “Tu Quoque” is a valid argument, but because a sense of proportion is needed.

Should the offending Marines receive some manner of punishment for their actions? Sure. Give ’em two days in the brig, and then move on. And when that’s accomplished, our media can start putting the actions of our enemies on the front page, their burning of schools, their decapitating babies, their murder and rape and arson and overall pitilessness. Otherwise, I am forced to conclude that the media focuses on the Marines’ misdemeanors because to do the same to our foe’s felonies would invite a fatwa.

I spotted this first on Ace’s sidebar: The Air Force has buried remains of servicemen killed in Iraq and Afghanistan in a landfill in Virginia.

I know. I know. Ladd Ehlinger, who worked for the military in some capacity until 2001, has piled on. But hold a second:

Air Force now confirms that body fragments linked to at least 274 fallen military personnel sent to the Dover Air Force Base Mortuary were cremated, incinerated and buried with medical waste. That procedure was in place between November 2003 and May 1, 2008. The Air Force also said that 1,762 body parts were never identified and also were disposed of, first by cremation, then by further incineration and then buried in a landfill.

Wait…what’s a body fragment? Is that a body? What is it?

When bodies are not intact — for instance, in the aftermath of a crash or explosion — a body may be released to the family before some parts have been identified by the Air Force Mortuary at Dover Air Force Base in Delaware. Families can elect to be notified when parts are identified or leave it up to the military to dispose of them appropriately. Since the policy was changed in 2008, the unclaimed body parts are buried at sea.

So what I take from this is: what got buried in the landfill was unidentified body parts, not whole bodies. What could be identified was sent home to families as it should have been.

At some point, it’s not 100% possible to determine who a particular bone or organ belongs to. DNA testing can only take you so far. And hanging on to body parts in the forlorn hope that they’re going to ever be identified — so you can ship them to family members who have already buried a loved one — is a rather ghoulish bureaucratic perversity.

You can fairly argue that cremating the leftovers and putting them in a landfill is insensitive. I agree, and am glad for the new policy — instituted in the closing months of the Bush Administration — of sea burial (after all, if it was good enough for Bin Laden…).

But however hot this tempest blows, it may extend no further than the teapot’s dome.