The following piece of Facebook-aimed political wit is Zap Branagan, and I am Kif.

That’s right. Read it again. Drink it in. Bask in it. Taste the rainbow.

Where to begin? There’s so many things, not just wrong, but tiresome about this, that I wonder if it’s even worth the effort to rebuke. Surely if you applaud that, nothing I’m going to say will convince you. So the entire exercise is either a monument to what I foolishly call my cleverness or just the latest example of Facebook Trolling to come down the pike. And I’m not entirely certain if I’m the troll or the billy goat in this scenario.

Ah, what the hell… I’ve come this far ….First, it bears repeating that the words “separation of church and state” appear  nowhere in the Constitution. And to be fair, they don’t appear in this particular RottenECard, either, no doubt owing to their being insufficiently hardcore for a RotTeNeCarD. But that’s the political shibboleth we’re playing with, the mantra that lies at the base of every call for smelling salts when a pastor gets political at the pulpit. So it needs to be dynamited.

What the Constitution says is:

Congress shall make no law respecting an establishment of religion, or prohibiting the free exercise thereof

… and that’s it. There shall be no established religion, and no banned religions. Now you could deduce a “separation of church and state” principle operant in those words, but said principle is not coded into law in any other way. The idea that a minister of any church who decides to preach a sermon on matters political is somehow Unconstitutional does not proceed from any honest reading of the Constitution. How do I know this?

Now, some people may consider “God Damn America” to be an unpolitical statement. I’m not sure how you arrive at that conclusion, but some may hold it. And some of you may be readying up a Tu Quoque against me, as surely the 2008 Reverent Wright Kerfuffle demonstrates that conservatives too get angry about campaigning from the altar. But it wasn’t the fact that Wright was a preacher that offended us; our objections lay solely with the content of the message.

Reverent Wright may be an ignoramus of false indignance or a righteous prophet of rage, depending on your politics, but no one thinks that anything he says runs afoul of the law in any way. Because it doesn’t. A man may hold that the Gospel commands him to denounce left-handed people on alternate feast days, or even that bread and wine are the flesh and blood of our long-promised Godhead, and the state has nothing to do with it, because those things are all Free Exercise. Not liking what the Bible calls sinful is Free Exercise. Denouncing Democrats and Republicans is Free Exercise. You may have noticed how when ministers fail to adequately separate Church and State, that the Religion Police don’t whisk them off to MiniTruth headquarters.

Secondly, could we get a clear rule on whether you’re required to cough up taxes in order to exercise your political rights? Because when Republicans grouse about those people who pay an effective income tax rate of zero yet vote themselves largesse from the treasury (whether said largesse is there or not), somehow that makes them The Worst People in the World. Also, I keep hearing from every proggie and his aunt that requiring a $10 Photo ID at the voting booth is exactly like blasting Freedom Ride marchers with fire hose. But apparently pointing out which candidates endorse abortion-on-demand or gay marriage inside a church requires some form of poll tax. 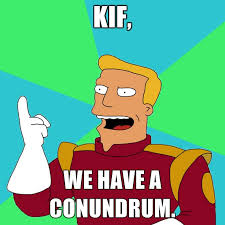 Thirdly, shall we take a nice long look at how this closes?

Then they should shut up or be shut down.

People seem so proud of themselves when they say things like this. Like there’s something utterly badass, and not at all infantile, about calling for the silencing of things they disagree with. Like they’re finally expressing their true point of view, breaking at last the invisible chains of societal expectations. And they want me to see it, and be awed by the courage of it.

Fine. I see your Boner of Fascism. You would have made an excellent Red Army Political Officer, sniffing around the enlisted mess for signs of counterrevolutionary tendencies. Tomas de Torquemada would fight Cardinal Biggles and Cardinal Fang to the death to be your confessor. In fact, if you’re not working for a university right now, enforcing a “Free Speech/Tolerance” zone of some kind, you may want to seriously reconsider your life.

Look, I don’t disagree that politics and faith should be separated. They’re like salt and sugar: they may seems strikingly similar, but they should only be mixed with careful instruction. But it’s hard to take people seriously who yell “get your religion off my politics!” when they assiduously applaud getting their politics all over everyone’s religion. There’s no reason why, when the economy is creeping toward a second recession, when Al Qaeda is killing our ambassadors, that we should be debating whether Jesus would have voted for ObamaCare. But so long as Obama takes ObamaCare as a mandate to order religious institutions to do things that violate  their religions, that’s exactly the debate we’re going to have.