I thought I’d poke my head up and remind myself and a few others that I am not, in fact, dead (although signing off with a quotation from the Inferno last week did push the morbidity. It was on my mind). It’s just that time of year, and I’ve just got no time to even think about what I might want to blog about. My headspace is used up.

Nora was a Baby Once from Andrew Patrick on Vimeo.

Downloaded a Vimeo app for my iPad, and noticed it had a video editor function. So I sat around this morning playing with it. Nothing but videos of Darling Daughter from the summertime, when she was just testing the waters of mobility. The song is “Teenager” by a band called Apache Dropout, it was taken from a list of songs Vimeo has available for people to download and use in their videos. I think it’s pretty good, in a mid-60’s early-psychedlic “I’m a Man” kind of way.

Found the app very intuitive; I just tapped around and figured it out. Audio and video tracks synced up easily. One exception: the title cards. For some reason putting text at the end was beyond the capacity of the app to understand. I created a little title card that said “slapped together on my iPad” or some such, and it would let me drag it to about the halfway point, and no farther. And it wasn’t like my fingers simply weren’t gripping the object: it would let me drag it over to the end, and then it would slide back, like I had done something utterly preposterous, like put the title card in the audio track slot. There was no discernible logic to it, which provoked much yelling and the fleeting desire to fling my iPad across the room, as only things with no discernible logic provoke in me. However, I found that if I added more title cards, I could move them. That’s why there’s a ridiculous copyright declaration at the very end (A Giggles Worth Productions does not exist except when I feel like making a video). 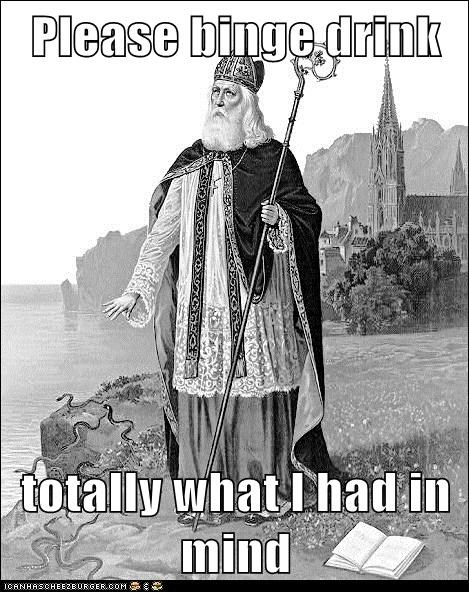 I have not pub-crawled on St. Patrick’s Day in years, partially because I’ve had enough years of doing it, and partially because I’ve realized how inane it is. I don’t bounce back from getting ripping drunk like I used to: the recovery that required a ham sandwhich, a glass of milk, and a few episodes of I, Claudius when I was 20 now requires a full day’s nap on the couch mainlining Gatorade and bemoaning my body’s advancing decrepitude. Been there, done that, pitted out the “Kiss Me, I’m Irish” T-shirt to the point where it’s useful only as a paint rag.

Everything about St. Patrick’s Day seems a calculated insult to the entire Irish nation: a people who spent centuries as the bleeding ulcer of the British Empire has their culture reduced to leprechauns, food coloring, and vomit. I’ve got enough Irish in me to qualify for the hyphen, but I’m also carrying Scottish, English, German, Austrian, and the Lord knows what else. The nationalities of Europe matter in Europe; here my diversity of ancestry can be summed up as “white.” Celebrating one part of my heritage with all the intellectual heft of a Lucky Charms box no longer interests me. This is a good day to read Yeats, consider the political intent of the Corn Laws, or savor the taste of some Red Breast on the rocks (preferably all three). It’s not a day to pretend that I’m an uneducated mill worker from Hell’s Kitchen whooping it up and thumbing his nose at the WASPS who grumble at my people’s penchant for spreading Popery and syphilis (just in case you ever wondered why the Parade goes down 5th Avenue). I might as well dress up like a cavalryman and act out Fort Apache in my backyard. It would be as accurate a tribute to my ancestors.

The actual St. Patrick was a heroic figure, an escaped slave and missionary who accomplished what the Roman Empire had never dared: bringing Ireland into the fold of Western Civilization. And he did it with a Book and prayers – the first foreigner the Irish did not send back into the sea and the last one who came without a sword in his hand. He would be utterly flummoxed to see what we do in his name.

I bind unto myself today
The strong Name of the Trinity,
By invocation of the same,
The Three in One and One in Three.

I bind this day to me for ever.
By power of faith, Christ’s incarnation;
His baptism in the Jordan river;
His death on Cross for my salvation;
His bursting from the spicèd tomb;
His riding up the heavenly way;
His coming at the day of doom;
I bind unto myself today….

–The Breastplate of St. Patrick

2 thoughts on “St. Patrick Knows Us Not.”