150 years ago, today, my great-great-great-grand-uncle, Dallas Patrick, a private in 11th Pennsylvania Reserve Infantry
(40th Volunteers), was taking part in the largest land battle ever to take place on the North American continent. I’ve been to Gettysburg on several occasions, and some part of me would kind of like to be there to see the re-enactment of Pickett’s Charge. But another part of me is just fine with sitting here and breaking down some of the mythic detritus that has gathered around this scar of history. To wit:

1. Gettysburg was not the Turning Point of the American Civil War. Robert E. Lee’s campaign into Pennsylvania came about as a result of the need to do something, anything to turn the Confederacy’s sagging military fortunes around. Apart from Virginia, where Lee’s Army had defended the Confederate capitol of Richmond masterfully for almost two years, the Union was on a victorious march. Tennesee was overrun, and northern armies moving into Missisippi and Georgia. The naval blockade of southern ports was starting to squeeze, and the Yankees could strike from the sea at will, shutting down ports such as New Orleans. Finally, the Missisippi river was about to be lost. Vicksburg, the last southern stronghold on the river, was under siege by Ulysses S. Grant. It’s surrender was only a matter of time.

Lee launched into Pennsylvania to try to make something happen that would relieve this sour situation. If he could beat the northern army north of the Potomac, if he could capture Philadelphia, maybe the British and French would stop playing footsie with Richmond and intervene, as Louis XVI did after Saratoga.

That did not happen, obviously. And when it was all over, both Lee’s Army of Northern Virginia and Meade’s Army of the Potomac slunk back to their starting points, exactly as if nothing had happened. Except for the 50,000 casualties, nothing had.

Just to underscore the point: Gettysburg ended on July 3rd, 1863 after the repulse of Pickett’s Charge. Vicksburg surrendered to Grant on the following day, July 4th. Even if Lee had won, Vicksburg would have fallen, the Mississippi would have become a Union river, and the Confederacy would have been cut in half. Meade would have retreated to another ridge of Pennsylvania hills and Lee would be no closer to Philadelphia, Baltimore, or any place else that would have made a difference.

If the Civil War had a real “turning point” that is, a point after which a northern victory was inevitable, it was Sherman’s capture of Atlanta the following summer. Atlanta demonstrated to war-weary northern voters that victory could be had, and guarunteed Lincoln’s re-election. Absent the possibility of a Democratic President (McClellan) negotiating a settlement, the CSA was doomed.

2. Gettysburg was not a “High-Water Mark” for the Confederacy. You’ll see this phrase at the battlefield, as part of a monument to the point where Pickett’s Charge made contact with the Union line. As poetry, the expression can hardly be bettered. As history, it fails.

As stated above, the South was already on its way to losing by the time Gettysburg happened.

If the Confederacy had a real “high-water” mark, it was in the summer of 1861, after First Bull Run and Wilson’s Creek gave the hope that Southern men really would be able to outfight any number of Yankees. But once the northern soldiers got used to the sound of battle, and were led by aggressive, competent commanders, that hope vanished.

For that matter, the phrase vastly over-estimates the success of Pickett’s charge. That particular infantry assault was not a near miss; it was foredoomed. At a council of war the night of July 2nd, George Meade, the Commander of the northern Army of the Potomac, predicted that the Confederates, having spent the day assaulting the Union right and left without success, would make a try to pierce his center with one massive charge. He set up his order of battle accordingly, with reserves on hand should a breach in the line occur. Which is exactly what happened.

George Pickett, the commander of the freshest division in the confederate army, was eager enough to make the charge, having been among the first Americans into Mexico City during the Mexican War, but having been sidelined during most of the significant battles in Virginia. But his subordinate brigadiers thought the charge “a desperate thing”, and his Corps Commander, Lt. General James Longstreet, tried in vain to talk Lee out of it. But Lee was adamant, having convinced himself after frustrating the offensives of superior northern armies time and time again, that his men could do anything.

They couldn’t. As the 11-12,000 Confederates advanced against the Union center, the northern boys welcomed them, shouting “Fredericksburg!” (where, the previous December, it had been the Yankees futilely charging entrenched Confederates) and “Come on, Johnny, keep on coming!” The Army of the Potomac had fought these boys before, and were eager, excited even, to give them a taste of their own medicine. Of the 11-12,000, fully 7500 were killed, wounded, or captured. As Lee watched the dazed stragglers return to Longstreet’s lines, he bowed his head and said “All of this has been my fault.”

Pickett never forgave Lee. For the rest of his life, whenever his commaner’s name came up, Pickett would only say “That old man had my division shot.”

So the High-Water Mark sits as microcosm for the entire Gettysburg campaign: a last desperate throw of the dice, when all other options had failed, which cost more than could have been imagined.

3. Stonewall Jackson would have made no difference. Lt. General Thomas J. “Stonewall” Jackson built a legend around himself in the two years he fought in Virginia. Lee called him “my right arm.” In the spring of 1862 he ran a Fabian campaign to keep the Northerners out of the Shenandoah that would have Quintus Fabius Maximus proud. And his untimely death from wounds received at the Battle of Chancellorsville in May, 1863, has given rise to unending games of “what if?” Some of them started happening during the battle itself.

Most of Stonewall’s troops were given to Dick Ewell, a bald, dyspeptic chap who was no replacement, in the eyes of many in the Army of Northern Virginia. And on July 1st, Ewell is supposed to have missed an opportunity to drive the Yankees from the field and take the ridge that they would contest so bloodily for the next two days.

Maybe. Then again, maybe not. Stonewall, despite his legend, was not in fact Mars incarnate. He had his off days. During the Seven Days battles, Jackson routinely missed orders and started late. During one of the battles he stopped and sat under a tree sucking lemons while his compatriots were fighting. He was masterful at Second Bull Run, and although his performance at Antietam cannot be faulted, neither can it be credited with accomplishing much. At Fredericksburg his men were barely involved. Then came Chancellorsville, at which he routed a union corps and took the bullet that killed him.

So yeah, maybe Jackson would have stormed Cemetery Ridge. And if he had? Half the Union army wasn’t even at Gettysburg on the first day. Meade would have pulled back to a different ridge (it’s Pennsylvania, people) and sat there daring Lee to do something else. He didn’t need to smash Lee’s army to send it back to Virginia, just hamper and bloody it until Lee gave up, as after Antietam. 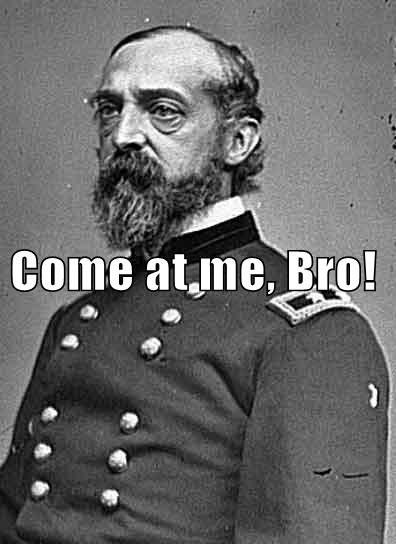 Or, for all we know, Jackson would have decided that a tree and a lemon and a Bible were what was needed. Sometimes, he was like that.

In any case, what went on at Gettysburg a century and a half ago decided far less than we would like to think. As with everything else in that conflict, it arose out of causes not fully understood, and ended with much more left to do.