I watched Our Lord and Savior get inaugurated again at Wegman’s whilst getting some coffee. He’s graying. He looks smaller. I didn’t stick around for the address. I expected it to be the usual boilerplate, and absent some rather proggie-sounding talking points, I don’t doubt that it was. The whole concept of Obama, which even I found fascinating four years ago (not that I voted for him), doesn’t merely offend me as a proponent of liberty; it actively bores me.

Seriously, what’s he got left? Running to Al Gore’s left? Climate change is SO 2003. It won’t pass the House. Gay Marriage? Already on its way. Another Stimulus? Trillion-Dollar Coins?

He’s got 51.9% approval today, which will probably guaruntee him the kind of hanging-around-waiting-on-events second term that Reagan and Clinton had. George W. Bush was ten points higher, and his second term went from hope to change right quick. 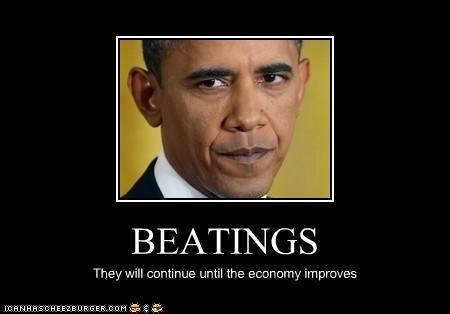 So buck up, lil rascals of the right. We aren’t squaring off against Julius Caeser. We aren’t even dealing with FDR. We’ve got a self-besotted Chicago ward boss with a golden voice and handsome features. Let us spend the next four years checking him, poking him, denying him anything in our power to give, be that approval of his legislation, the framing of the issue, or even the benefit of the doubt. We don’t need to impose our own agenda, just frustrate his as long as possible. 2014 is not far away.

And whenever possible, point and and laugh. Chickens will be coming home to roost soon enough.