I’m old enough to remember when being a geek was a bad thing. I remember the days when kids who were into sci-fi, fantasy, and other forms of alternative literature hid that fact from others if they had any hope of fitting in. Hell, I remember when knowing how to work a computer was a sign that you were socially retarded and would thereby never enjoy romantic companionship of any kind. So I regard the rise of Geek Culture in all its forms with many emotions, but mostly bemusement.

I find it odd to see such things as Comic Book Conventions becoming not merely mainstream, but obligatory acts to retain a certain level of geek cred. For that matter, the very idea of “geek cred” raises the eybrows, especially as it increasingly becomes a synonym for “pop culture awareness.” I don’t know when all this happened, and I understand but little of it.

Thing is, I’m not very good at being a geek. I know no programming languages. I got B’s in math. I only played Dungeons and Dragons a few times. My comic book collection is small and unimpressive. I’ve never even watched Firefly or Battlestar Galactica.

So it’s time to come clean. It’s time to cop to all the Geekery out there that I have no interest in. It’s time to admit that the word “geek” has lost all meaning, and may as well go back to referring to a carnie who bit the heads off chickens for nickels. Because if I can admit that I don’t care about the things I discuss below, and still call myself a “Geek” in my tagline, then anyone can.

So begins a limited series on all the incredibly geeky things that are important to Geek Culture, That I Find Unutterably Dull. These must be taken as my own opinions. I am not criticizing any TV Show or book for lack of quality or good storytelling. Being old enough to remember Geekdom’s Elder Days also means being grown up enough to know that something can be very well done and still not appeal to me. So if you are an ardent fan of what ever I happen to discuss in this series, assume that the fault is mine. Today, it’s Dr. Who.

People really really like this show, and this concept. The whole business of Time Lords, Tardises (Tardii?) and Companions has become so secondhand that Community has a whole running gag about Abed and Troy’s obsession with Inspector Space-Time. It’s a universe older that Star Wars, and about as essential.

I’ve watched a few episodes of the old British show over the years, mostly late at night, mostly on PBS. I liked the theme music.

The show itself: shrug. Didn’t hate it. Didn’t love it. It had its creative moments, and there was something almost cheeky in the way that successive actors in the part became successive Doctors, and thriving debates among fans as to which of the Doctors is Best! Ever! have become as clichéd as the old standby of whether Superman could defeat the Incredible Hulk (which he can).

On some level, I suppose I get it: a phone booth as a doorway to transfinite knowledge and the bending of space and time, technology as portal and threat. The Companions keep the Doctor grounded, and the Doctor keeps the Companions alive. You get to fly all over the universe, across the boundaries of past and future, with a spunky little hottie deferring to your superior knowledge and a swank velvet smoking jacket. 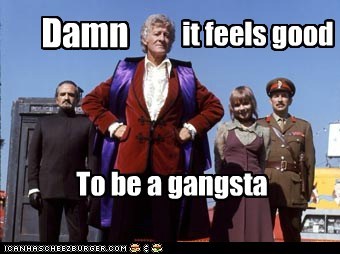 I’ve never seen but snippets of the new show, and if I never see any more of it, I will die perfectly content. This, as I said, is not a criticism of the show. I’m sure the writing is clever and the actors utterly Stansislavskian. I’ll bet sexy bon mots and pithy wisecracks punctuate stuff blowing up real good enough to satisfy anyone. Don’t care. Not interested.

Never gave much thought to why until recently. All Dr. Who – all of it – is basically the 4th Star Trek movie. You know, the one with the whales. And because of that, it violates one of my most essential pet peeves about sci-fi and fantasy, which is as follows:

I hate hate hate it when a sci-fi or fantasy universe has any contact with the world we live in.

I don’t want to watch Kirk and Spock interact with Earth in the 1980’s. I lived on Earth in the 1980’s. It’s not a mystical mind-bending journey for me: it was middle school. I don’t want to watch their fish-out-of-water hijinks (“Heavens, Captain, what is this Rock and Roll?”). Keep your science fiction characters in your science fiction universe. Go forth to find new life and new civilizations. Ordering a latte from a guy in a Grateful Dead T-Shirt while listening to the mating sounds of humpbacks hardly qualifies as boldly going where no one has gone before.

This rule applies even when you take a character from our world and transpose him to the fantasy world. Yes, I remember The Last Starfighter. No, I don’t remember it being terrible. But do I need to see it again? Nope. I have better things to do that watch people comment on the fact that stuff shore is different in these here alien worlds than back on earth, you betcha. I couldn’t get more than 50 pages into Zelazny’s Nine Princes in Amber series, because I had zero interest in watching ReaderProxy McExposition fumble his way into the Magic World.

I like my sci-fi and fantasy fully immersive, thank you very much. I want to start there, middle there, and end there. I’m a literate, educated adult; I can pick up on context clues. Having worlds collide to introduce a universe accomplishes nothing that a first-person narrator doesn’t with a great deal more efficiency.

I want to know that there’s millennia of backstory and history to this place, which the creator knows and has put into place before that first book or episode ships.

I want to know that this place functions according to said backstory, rather than the amateur messianics of the spunky outsider who’s going to spend the first two acts going “Huh?” and “What does this button/magic object do?”

I understand that not everyone agrees with me. For lots of people, having to keep track of the fact that Therin Greydude was Nedder’s captive after him and King Baratheon beat up on the Viking dudes who have squids on their shields or something, which was after Jamie Lannister killed the old crazy king, unless it was before, is simply too much work to put into their entertainment. If you’d rather have a solid core of primaries deal with a new crazy cliff-hanger every week, peace be upon you. We don’t all have to like the same stuff.

But because of its structure, everything that happens in Dr. Who is going to bore me. Dr. Who is a Time Lord. Time Lords save the universe. Companions help, when they’re not almost dying. The problem is introduced, the problem is solved. Maybe there’s an overarching Problem of the Season. In any case, the entire existence of Companions serves to have a character wandering around reminding us that Goshers, Stuff is Different Here.

And it’s not like the show can dispense with that. Absent the Companions, absent the Iconic™ London-Phone Booth/Contrivance, then Dr. Who becomes just as alien as the things he encounters. That kind of character becomes an amoral anti-hero without someone to rescue and explain things to.

But that’s still way too many episodes that just happen to require traveling to Swinging 60’s England (or 1850’s England, or 1420’s England….) for my tolerance. If you’ve seen one instance of the Dr. smirking derisively at some poor Brit who’s just trying to come to grips with what the devil’s going on, you’ve seen them all.

One thought on “Geek Heresy: A Consideration of Popular Fictional Universes That Bore the Living Hell out of me – Episode 1: Dr. Who Cares?”