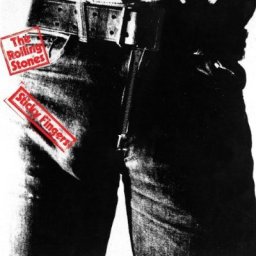 You could probably make an argument, if you really wanted, about the relative decline of Andy Warhol album covers by an exegesis of the “iconic” Velvet Underground & Nico cover as against the Sticky Fingers cover. For the Velvets, the genitalia was suggestion, conveyed via the kind of joke that middle schoolers could get. Five years later, as the Sixties Insurrection became the Seventies Satyricon, the need to feign interest in anything besides genitalia diminished, so we were treated to this.

That’s why I never even bought this album until last year, despite owning every other one of the “Holy Quadrilogy”. The joke in the album name was just too dumb. And the only songs I knew from it “Brown Sugar” and “Wild Horses”, were the ones from that era I cared least about — “Sugar” always seemed like a bastard offspring of “Jumpin’ Jack Flash” and “Honky Tonk Woman” and “Wild Horses” was the kind of song that got covered by mid-90’s womyn-rawkers to accompany dramatic moments on Buffy the Vampire Slayer.

But they don’t call it completism for nothing, and some recent readings convinced me that some of the country-folk-rock of the early 70’s deserved a listen. So I plunked down for the most recent remastering of Fingers (complaints of fans of the previous version on Amazon notwithstanding). And I’m glad I did.

This record has an understated beauty that none of the other Stones albums of this era can boast. Stuff like “Sway,” “Moonlight Mile,” and “Sister Morphine” sound like nothing at all the first run-through, only to get better and better with each listen. But the biggest surprise for me was “Dead Flowers,” which I did not know was a Stones song, being familiar only with the Townes Van Zandt version that closes out The Big Lebowski. And while there’s nothing wrong with that version, It’s hard not to prefer the peppier original (covering the Stones is harder than most people think, because Keith plays his guitar with a very specific tuning).

And yes, it’s impossible to hear “Can’t You Hear Me Knockin'” without images of Joe Pesci in Casino dancing about in your head. That’s all right; the song overcomes it’s cinematic baggage, combining with “You Gotta Move” to create some of the stinkiest blues the band ever laid down. So, like Let it Bleed, this album evenly balances between hard-rock punch and country-rock melody. That was what the Stones were best at, and they never quite did it better than this.

One thought on “Rating My CD’s: Sticky Fingers”