I’ve really blogged enough about this show, but as long as it keeps sending me hits, I’ll continue registering my notice of comic FAIL.

Blackmailer’s Don’t Shoot finally threw in the towel this season.

It’s a world of smug 20 and 30-somethings whose self-regard vastly outweighs their accomplishments. Watch it to see what a glimpse into the collective imagination of Slate’s editorial board would look like, only with a sense of humor.

I admit I started the season full of hope that the funny would be recovered as the purpose of the show was. There were even signs of self-awareness:

But somewhere around the anti-climactic final slap-bet episode, I lost the will to continue. I don’t care. I don’t care about whether Marshall and Lilly are going to go to Rome or not (Wife watched the “Unpause” episode, I didn’t. She was “meh” about it). I don’t even really need to see Ted Meet the Mother. I’ve seen her, and she’s intereacted enough with the other characters to preclude the nerdiest theory that she’s imaginary. Ted’s going to meet her, and everything will be fine.

Rather, I’d like to look at how TV characters tend to morph into simplified versions of themselves, causing other characters to morph in other ways to restore the balance. This visual analysis of Family Guy has been around for a while:

It’s been done to The Simpsons, too, perhaps less effectively:

HIMYM is practically begging for the same treatment. A few minute’s image-googling yielded a picture I could Cheezburger to my satisfaction. Enjoy: 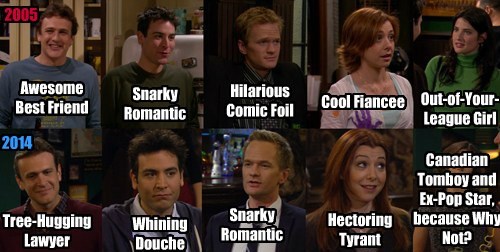 8 thoughts on “How I Met Your Mother: a Consideration of Character Decline”