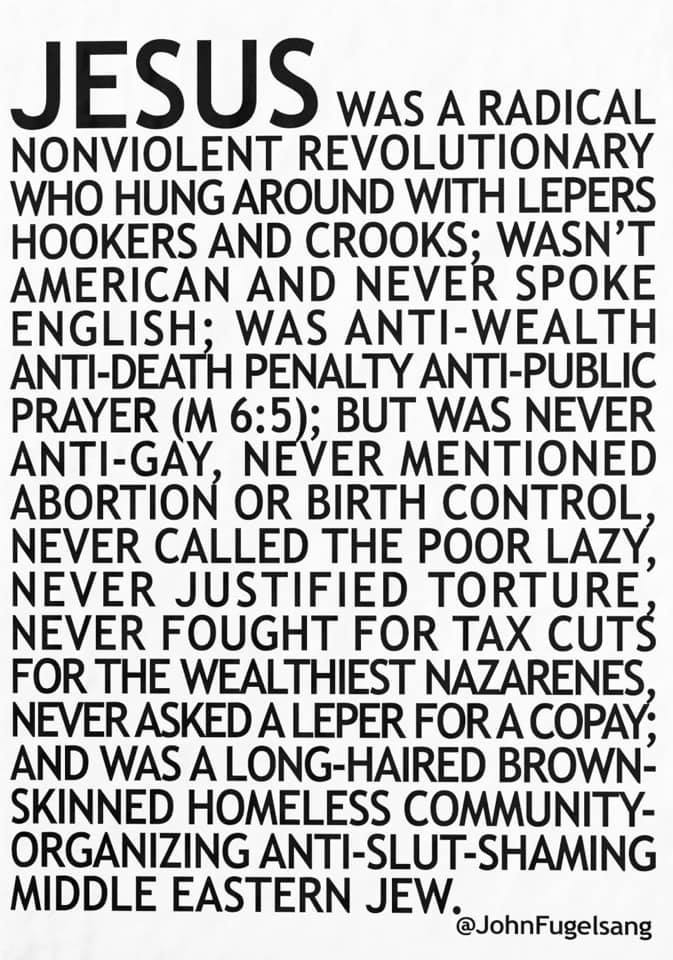 This is the kind of rhetorical nonsense that people who think they’re moar SMRTer then dem stoopid Xtians love to share. It’s so full of irrelevancies, absurdities, and flat-out mischaracterizations as to represent a Perfect Storm of Woke-Signalling. It cries out to Heaven for a Fisking.

Original in Bold, my responses in italic.

Jesus was a radical nonviolent revolutionary…

Lemme stop you right here. “Radical” is one of those words, like “fascist” that has been overused to the point of meaninglessness. He was certainly not a “revolutionary” in any accepted meaning of the term. In the first place, claiming to be a Messiah, the Heir of the House of David, is if anything a Reactionary position, as restoring the Davidic Kingdom would by definition be restoring a long-honored past. In the second place, dude was quite clear that his Kingdom was Not Of This World, and had very little to say on proper political arrangements, other than everyone should pay their taxes, which is the least revolutionary political statement of all time.

As for the “nonviolent” bit, we’re talking about the guy who kicked the money-changers out of the Temple and promised that he was “bringing not peace, but the sword,” right?

…who hung around with lepers, hookers, and crooks…

Which, as he explicitly said, was in order that these people be healed, forgiven, and brought back into the fold. Not as a statement that leprosy, prostitution, and theft were valid choices to be celebrated.

Your strawman, it burns so beautifully. I’ve heard versions of this chuckle-witted applause line a million times if I’ve heard it once, and always comes from someone mocking the idea. I have never in my born days heard a grown adult Christian of any denomination claim that Jesus was American and spoke English. Find a new line, will you?

Y’all just love that line about the difficulties of a wealthy man entering the Kingdom of Heaven. True, love of money is a sin. But most of the Bible treats wealth as a blessing from God, to be dispensed with in a Godly way, but by no means wicked in and of itself.  And if we’re being honest, you don’t think YOUR money is bad. You think the other guy, who has Too Much Money, is bad. There’s a whole commandment just for you.

I’m gonna need a citation on that anti-death penalty thing. Because Jesus was real big on casting people into the fiery Gehenna, to the point of telling people to cut their hands of and gouge their eyes out to avoid it. And when Peter told Jesus NOT to go and have himself handed over to death, Jesus called him Satan and told him to get behind him. It’s almost as if this guy was working on a meta/cosmic/spiritual level, and doesn’t deserve to get shoehorned into your modern political demands. But whatever.

Matthew 6:5 does indeed tell people to pray in their homes rather than make a loud show to their neighbors of how Holy and Good they are. If you think he was talking about punishing high school kids for saying a prayer before their football games, because an atheist might be downwind, then you’re deliberately taking Matthew 6:5 out of context. A guy who publicly taught people his message about God, to the point of preaching to thousands at a time, was 100% not saying what you’re trying to squeeze out of him here.

…But was never anti-gay…

Being “gay”, like America and the English language, didn’t exist in the first century. Jesus didn’t speak about “gay issues” because there was no subculture seeking validation for them. What Jesus did say was that the Mosaic Law (which is blunt on homosexual acts being contrary to God’s Will) was to be retained and followed, and unless your righteousness exceeded that of the Phariseees, (meaning you followed the Law even better than they did)  you weren’t getting your Golden Ticket. He also rather publicly stated (Matthew 5) that marriage existed in order to bring together male and female, and that such was what God intended from the beginning, in case you’re planning on updating this screed to include same-sex marriage or the 57 new genders.

Again, because this wasn’t an issue for Jews of his time. The Mosaic Law (which again, Jesus said he was all about) applies the death penalty to men who by violence cause an unborn child to die (Ex 21:22-23). No Jewish sect of Jesus’ time was pro-abortion or pro-birth control, and the Early Church was foursquare in its condemnation of Roman practices of both. He didn’t have to mention it; everyone was on board.

“But his master answered and said to him, ‘You wicked, lazy slave, you knew that I reap where I did not sow and gather where I scattered no seed. ‘Then you ought to have put my money in the bank, and on my arrival I would have received my money back with interest. ‘Therefore take away the talent from him, and give it to the one who has the ten talents.
“For to everyone who has, more shall be given, and he will have an abundance; but from the one who does not have, even what he does have shall be taken away. “Throw out the worthless slave into the outer darkness; in that place there will be weeping and gnashing of teeth.

This also doesn’t sound like a guy who’s “anti-wealth”. Huh.

See above, regarding cutting your hand off and poking your eye out to avoid Hell. Jesus’ pronouncements about Hell as a Lake of Fire and a Second Death, are pretty vivid and horrifying. But you do you.

…never fought for tax cuts for the wealthiest Nazarenes…

Nazarenes weren’t wealthy. Nazareth was a half-Samaritan backwater that no one thought anything of. It was the Flyover Country of Judaea. If anything, Jesus endured the snobbery of Hellenized, globally-aware Jerusalem urbanites who scoffed at the notion of anything good coming from those dirty fishermen.

As for the statement that he never specifically advocated for tax relief, for the wealthy or otherwise, that’s probably because of his general lack of interest in political questions. Is that a stance you’re going to be emulating anytime soon?

…never asked a leper for a copay…

He also never demanded that Caeser Augustus and the High Priest create a control board rationing care to lepers and demoniacs. He just healed them. Because he was God.

..and was a long-haired…

Every single artistic depiction of Jesus of the last two-thousand years has shown him with long hair. What secret do you think you’re uncovering?

I promise you, no one is shocked by this. Everyone knows Jesus wasn’t a European. I’m pretty sure Chinese Christians know that he wasn’t Asian and African Christians will admit that he wasn’t black. This is another strawman, and says way more about you than it does about whoever you imagine you’re calling out.

Precisely what did Jesus organize the “homeless community” of Judaea to do?

And while you’re answering that, you can go ahead and tell me what Barack Obama’s community-organizing accomplishments were. I’ve been waiting for about 12 years for that state secret to get declassified.

Tell that to the Woman at the Well.

15 The woman said to him, “Sir, give me this water so that I won’t get thirsty and have to keep coming here to draw water.”

Jesus said to her, “You are right when you say you have no husband. 18 The fact is, you have had five husbands, and the man you now have is not your husband. What you have just said is quite true.”

Now, I know you’re really talking about the Woman Taken in Adultery a few chapters later, in John 8. But you’re taking the wrong lesson from that story, as almost everyone does. Jesus didn’t say “The law is wrong and you shouldn’t stone her,” he said “Let him who is without sin cast the FIRST stone.” Not all the subsequent stones, just the first one. He was making a point that he often made about casting out your own sins (hence the aforementioned hand-chopping and eye-gouging) before dealing with another’s. And when the crowd dispersed, Jesus didn’t say “You Go Girl!” to the woman spared, he said “Go forth and sin no more.” As in “Get your life together, sister, or next time I won’t be here to slow them down.”

Hey, you got one right. Good for you!