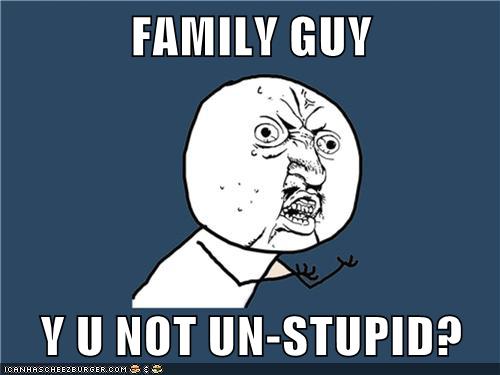 Ladd Ehlinger does what many righties have done over the years with regards to Family Guy, which is get nice and pissed at it and then banish it from his DVR. Which is a perfectly sane and sensible thing to do. But Ladd seems to sound surprised at the crudity of McFarlane’s political satire (it doesn’t matter if someone else wrote the episode; this is McFarlane’s show, and he undeniably approves of the message):

What the writers of “Family Guy” indulged in last night was the humor of high-school bullies who single someone out as being “gay,” regardless of whether they are “gay” or not. Ha ha.

Is the kid really gay? Nevermind the reality of the situation, we’ve got to make fun of this gay guy. Because if we do, we’ll be cool. And popular. And oh yeah, the gay kid is also racist. Bonus points for a joke making fun of him for both being gay and racist in the same breath. Triple lattes if you can make the joke anti-Semitic too!

“Family Guy” indulged in the behavior of the hyena pack. They are cowardly propagandists and bullies, and they’ve overstayed their welcome in my home.

The trouble with Family Guy lies in those instances where its writers forget what show they’re putting on. Family Guy is not a hipper, more post-modern Simpsons; it’s a hipper, more post-modern Beavis & Butthead. As I’ve written before, everything that happens on this show is stupid. The plots are stupid; the characters are stupid (including the “smart” ones. Brian is a college dropout and a crap writer and Stewie has lost all trapping of his original mad-scientist persona to become a catch-all snarkster). The show gets its laughs by being breezy and uncaring and winking at its audience. They deliberately write gags that aren’t that funny, but will become funny by the shamelessness of its repetition:

This kind of “joke” is self-effacingly bad: the humor is in the meta-message “See how dumb this is? Wouldn’t it be stupid if I kept doing it, even though it’s not funny? Well, you’re in luck, because we are just that stupid.” When this kind of gag is your bread and butter, you aren’t going to be that good at making political jokes. Above all else, political humor requires an effort to persuade through mockery; to assail something, as Ladd puts it, for being what it is. This thing may be exaggerated, but it should be something that anyone can recognize as being true. And to have any purpose at all, it should be something that doesn’t get said a lot.

Family Guy doesn’t have the patience for that; it’s too easy to monkey-wrench the scene with a “wouldn’t this be so stupid that you have no choice but to laugh?” gag that’s beside the point. As a result, the rare forays into politics are staggeringly juvenile — content to recycle left-liberal talking points while ignoring the real issue under discussion.

For proof, compare one of Family Guy’s earlier “political” episodes, “Hell Comes to Quahog”, with a South Park episode on the exact same subject, “Something Wal-Mart This Way Comes”. The South Park episode is superior in every respect: it mocks both Wal-Mart and hysteria surrounding Wal-Mart effectively while making a solid point about what Wal-Mart is and what it represents. Like most decent-to-good South Park episodes, it contains a kernel of thoughtful truth-telling underneath its crudeness and sarcasm.

“Hell Comes to Quahog,” by contrast, does nothing but give Brian a bunch of bathetic Naderisms to spout before mounting a convenient tank to destroy the Superstore USA (Yeah, they didn’t even have the guts to use the name “Wal-Mart”) while the A-Team music plays in the background (we get it Seth, YOU REMEMBER THE 80’S). Evil is destroyed, Meg is rescued, everything reverts to the status quo ante sitcom. No information or thought too long for a bumper sticker is expressed or needed.

This is why South Park’s parody of Family Guy was so effective; manatees in a fishtank bumping random balls around is a too-apt metaphor of the intellectual and creative cocoon that the writers sit in. And while watching marine mammals bat things around is certainly entertaining, eventually we all have to leave the aquarium.

15 thoughts on “Why Family Guy Sucks at Political Humor”