The problem with summertime is that you think you have all the time in the world, and every day you learn that such is not the case, and every night you forget it. And then it’s August and all the big projects you were going to tackle are still there, and you say the hell with it, what’s new on Netflix? I’ll take a fresh stab at it tomorrow.

Frankly, I’m pretty proud of myself if I remember to change the air filter for the furnace. I have one of those odd sizes, 16X24X1, which means I can never buy air filters on my way out the door at Target. No, it has to be Home Depot, which in our town is walled off from the main road by the Four-Way-Stop From Hell, because the cruel bastards at the county zoning board couldn’t imagine why someone who was shopping at Barnes & Noble wouldn’t want to get stuffed into the same bottleneck as everyone leaving Michael’s, Toys R’ Us, and the Depot. Because they hate us.

Today it wasn’t so bad. I had to grab something for my father for his birthday, and that means a trip to Barnes & Noble, because my father and I, who like to read the same kinds of books, have an unspoken pact about birthday and christmas gifts. They are always expected and unexpected: you know you’re getting a book, but the kind of book is always a surprise. Last year I got a new print of the first Sherlock Holmes novel, A Study in Scarlet, and a new Holmes book by a modern author (BTW, anyone who thinks the Sherlock Holmes film franchise is unfaithful to the books has not read the books. There’s more than enough evidence that both Holmes and Watson knew how to throw down, as 19th century gentlemen were generally expected to do).

The only thing weighing me down was the ERGO, and the baby inside same. An ERGO is a front-loading baby-carrier, with snaps and hooks and adjustments and pretty little blue flowers that I absolutely was glad of when I was snapping everything into place while a sun-drenched contractor pulled up in his Ford F250 and gave me the strangest of glances.  Because if the ERGO had been jet-black, that would have been totally manly. 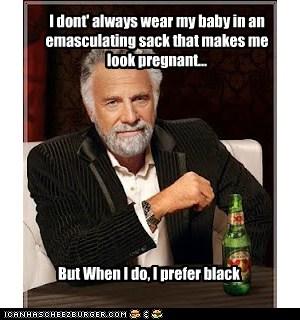 But whatever, I got the book and scored happy looks from all the women in the store, who doubtless considered me Husband/Father of the Week. And all without finding a baby bomb leaking all over the car seat, which is more than I can say for the last time we went to Starbucks.

Speaking of Books, who’s gone over and bought the first release from Riposte Publishing?