At this point, you really should know that if you’re watching Game of Thrones, and someone points a camera at you, something really bad is going to happen.

There’s a some agita on Facebook right now between people who have read the books and who haven’t, now that The Wedding has finally happened. I am one of the former, and I kept things to myself, aside from the occasional cryptic utterance that “you just have no idea what’s coming.” For myself, who threw my copy of Storm of Swords across the room when I got to this part, I have nothing but sympathy for people who went into that episode unawares (Here’s an Onion piece imagining that George R.R. Martin had forgotten about it. Think of it as a palate cleanser). So if you find yourself annoyed at everyone who’s all smug today, just remember that we’ve been exactly where you are.

From what I’ve picked up, the episode ended with the Wedding, and cut to black just after everything went down. I also seem to understand that the third book has largely been cut in half, which means everyone’s going to have to wait a whole other season to see the end of the book. I don’t know how many non-readers are going to have the patience for that, so from someone who’s gone all the way to the end of Book 5, and am still waiting to see how all this turns out, here’s something to keep in mind:

Stark and Lannister bears obvious resemblance to York and Lancaster, the feuding Houses in the Wars of the Roses. That particular dynastic bloodbath killed almost everyone involved with it, king and pawn, schemer and fool. Several times it seemed that York or Lancaster had won outright, but such victories were illusions. There was always another round of betrayal and battle to come, and more guilty and innocent to die. When it was all over, the House of York was a single princess, and the House of Lancaster was an obscure Welshman named Henry Tudor.

So just remember Arya’s Prayer, and know that this is nowhere near being over. 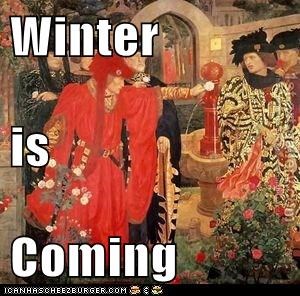 One thought on “Game of Thrones: Shock and Hope”