In an otherwise blandly professorial discussion of “girl squads” for the Hollywood Reporter, Camille Paglia sent some shade at Taylor Swift:

In our wide-open modern era of independent careers, girl squads can help women advance if they avoid presenting a silly, regressive public image — as in the tittering, tongues-out mugging of Swift’s bear-hugging posse. Swift herself should retire that obnoxious Nazi Barbie routine of wheeling out friends and celebrities as performance props, an exhibitionistic overkill that Lara Marie Schoenhals brilliantly parodied in her scathing viral video “Please Welcome to the Stage.”

It’s vintage Paglia, with sensible advice hiding behind the tartness, and perhaps an unstated annoyance that she has to talk about these current stars rather than barbering about Madonna for the 8,000th time. But because the media is populated by semi-literates, the Google page for “taylor swift camille paglia” currently looks like this. 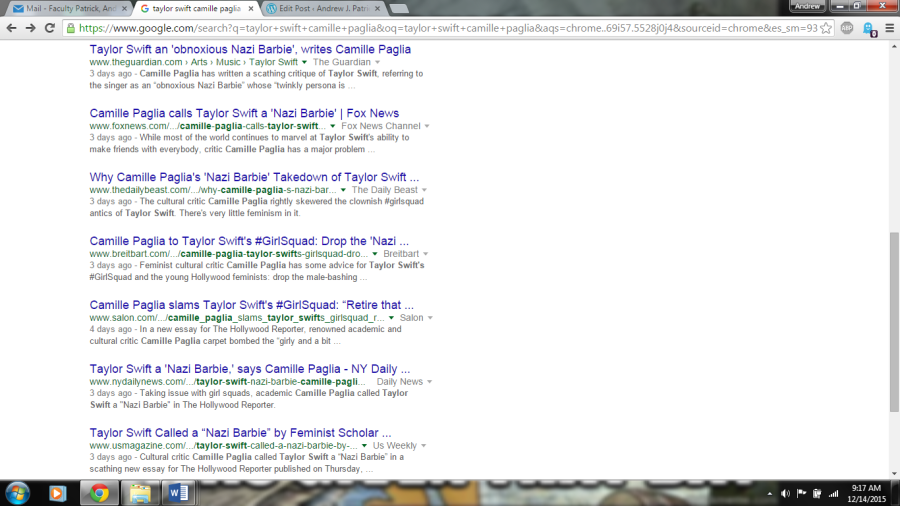 It’s exhausting to have to point this out, but at no time did Taylor Swift get called a “Nazi Barbie”. Let’s go back and read the sentence:

In this sentence, “Nazi Barbie” is a phrase modifying the word “routine”, which is the object of the verb “retire”. The subject of the sentence is “Swift”, and she is advised to do something. What is she advised to do? She is advised to retire something. What something? A routine. What routine? A routine of wheeling out friends and celebrities as performance props. This is the routine that is is acidly attacked as “Nazi Barbie”.

What does that mean? Well, we could ask Paglia what she meant, but this is the internet, so let’s decide that for her. What do girls do with Barbies? They play with them, dress them up, create adventures for them, etc. Is there a connection between this activity and what Paglia depicts Swift as doing with her friends and compatriots? Do you see it? Do you then see that “Barbie” is not being used as a perjorative to describe Swift?

As for “Nazi”, it’s just there for spice. In her author bio, Paglia complains of Swift’s “twinkly persona” that evokes “fascist blondes” from her youth. Paglia has a thing about blondes, emotionally and sexually, so she’s vulnerable to making pedestrian aesthetic connections of blondes and fascism. When she uses these words, she’s operating under the deconstructed definition of “fascism” as “something not desired”, as Orwell noted in 1946. For that reason, I think it fair for Jewish anti-Defamation groups to take her to task for connecting the Third Reich with a nondescript pop singer. Godwin’s Law is what it is, but professors should know better.

Everyone else is misconstruing Paglia’s remarks for clicks. It happens every day, and I sometimes wonder if the dogs of the press even notice that they’re doing it anymore.