I’m fine with this.

The Celibate priesthood is a non-essential tradition, dating no earlier than the Middle Ages. I dont’ expect it to be a panacaea, but I don’t think it will do any harm. At any rate, it constitutes a change to the priesthood, and I think after the last fifty years the priesthood merits a change.

Francis isn’t my favorite Pope, but I can’t fault this move.

Bad Catholic for the win, as the kids don’t say anymore:

Unless we have an assurance that the people we love will never suffer and die, to accept an invitation to love is to accept an invitation to fear. Love does not comfort, then, but “ups the ante” of human existence, making higher the highs and lower the lows. It makes life ginormous. It widens our capacity for sorrow just as it widens our capacity for joy. It increases our possible pain just as it increase our possible pleasure. It broadens the total scope of existence.

So Sayeth Thomas Williams over at Breitbart.

Rather, the Pope is a critic of the spiritual malaise involved of the worship of Mammon. As he should be. But he never has said, or even suggested, that the free market be replaced with another economic system.

Francis’s predecessor, Pope John Paul II, famously distinguished between capitalism as an ideology of lawlessness and capitalism as a system that promotes free exchange and creativity.

“If by ‘capitalism’ is meant an economic system which recognizes the fundamental and positive role of business, the market, private property and the resulting responsibility for the means of production, as well as free human creativity in the economic sector, then the answer is certainly in the affirmative,” he wrote.

This is a summary of how Pope Francis thinks.

Read the whole thing, and observe the regularity with which the progs who write for the mainstream media shoehorn papal statements into things which confirm their bias.

Because the media – especially the American media – do not understand Catholicism. They never will.

Over at Ace of Spades.

This is really the basic point about this faith — you can’t pick and choose what bits of it you like to believe. Catholicism is a faith that generally takes the middle path. This is why the sophomoric “What would Jesus do?” rejoinder to any political argument is laughable. Jesus wasn’t a politician. Jesus would forgive sin…then he would tell you to go forth and sin no more. See? The touchy-feely Jesus co-exists with the judgmental Jesus. It’s not like Highlander. People are quite fond of confirmation bias when it comes to Jesus Christ.

Everyone loves the Sermon on the Mount. Everyone ignores the parts about cutting off your left hand to avoid sin and coming not to bring peace but the sword.

Archbishop Tomasi also complained that a “certain indifference” to Christian suffering in Iraq existed in the international community.

“It is difficult to convince—because of false modesty, I would say—the Western powers to take a strong stance in defense of the Christians,” Tomasi said.

That’s the polite way of putting it.

You know how it is. You bounce back from a day of fasting and abstinence, and then you’ve got another day of abstinence staring down at you. 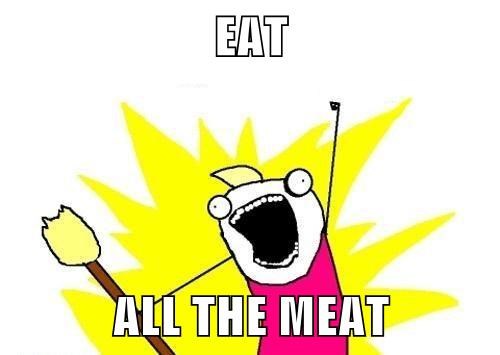 So Happy Meat Thursday, everyone. Now if you’ll excuse me, this chicken cordon bleu is not going to ravenously stuff itself into my mouth.

Abortion is not new. It did not spring fully-formed from the head of the Supreme Court in 1973. It is as old as civilization itself, and the controversy surrounding it is just as old:

“Why sow where the ground makes it its care to destroy the fruit? Where there are many efforts at abortion? Where there is murder before the birth? For even the harlot thou dost not let continue a mere harlot, but makest her a murderess also. You see how drunkenness leads to whoredom, whoredom to adultery, adultery to murder; or rather to a something even worse than murder. For I have no name to give it, since it does not take off the thing born, but prevent its being born. Why then dost thou abuse the gift of God, and fight with His laws, and follow after what is a curse as if a blessing, and make the chamber of procreation a chamber for murder, and arm the woman that was given for childbearing unto slaughter?”

That’s St. John Chrysostom, one of the Doctors of the Church, writing in the 4th century AD, damning men for seducing women and abandoning them, forcing abortion upon them (just in case you thought that those old unmarried men had no idea what made babies happen). This argument has been going on for a very long time, and it’s going to keep going on. Nothing that has happened recently is going to change that.

It’s safe to say that the dam is bursting on the Kermit Gosnell story, as it inevitably must have. Nothing as lurid and horrifying as the prosecution alleges could have truly failed to escape the public consciousness, no matter how much certain circles would have preferred it.

I am late to this story, not because I didn’t know about it, and not because I haven’t been reading up on it (Stacy McCain in particular has been all over it from the beginning). I haven’t wanted to write about this for the same reason Megan McArdle didn’t: sheer revulsion and horror. What this bland, grandfatherly-looking man of 72 – a poster-boy for “the banality of evil” if ever one existed – created in his Philadelphia clinic amounts to an infant-sized Auschwitz, a crime against humanity. And even generically pro-life people like myself dont’ want to realize that it exists, for to do so would be to violate a polite taboo.

In ancient Israel, the sanctorum at the center of the Temple in Jerusalem was called the Holy of Holies. As the home of the Ark of the Covenant, it made incarnate the presence of God in Israel. Only one man – the High Priest – on only one day – Yom Kippur, the Day of Atonement – could ever enter the Holy of Holies. Anyone else (such as the sons of Aaron in Leviticus 10) who entered died. The presence of God was not for the unworthy to look upon.

If modern feminism’s obsession with “reproductive freedom” has something of a religious character (and there are those that say so), then the birth control pill is its Eucharist, and abortion its Holy of Holies. It is Between a Woman and Her Doctor: mere mortals are not supposed to know what goes on. When anti-abortion activists take to the streets with pictures of mutilated fetuses, we are angry at the makers of the pictures, not the makers of the content. This is true even of pro-life people, such as myself. We don’t want to see this. We don’t want to know. Witness Roger Simon:

The trial of Dr. Gosnell is a potential time bomb exploding in the conventional liberal narrative on abortion itself.  This is about the A-word.

No feeling human being can read this story or watch it on TV without being confronted with the obvious conclusion — like it or not — that abortion is murder.

It may be murder with extenuating circumstances (rape, survival of the mother, etc.) but it is murder nonetheless.  Dr. Gosnell — monster though he is — has accidentally shoved that uncomfortable truth in our faces.

Pushing this case front and center in the media would change the national narrative on this subject.  (The current stats are here, via Rasmussen.)

I can give you two guinea pigs to prove this point — my wife Sheryl and me.  We were in the kitchen last night, preparing dinner, when we saw a short report of this story on the countertop TV.

Both lifelong “pro-choice” people, after watching only seconds, we embarked in an immediate discussion of whether it was time to reconsider that view.  (Didn’t human life really begin at the moment of conception?  What other time?) Neither of us was comfortable as a “pro-choice” advocate in the face of these horrifying revelations.  How could we be?

Yes, Dr. Gosnell was exceptional (thank God for that!), but a dead fetus was a dead fetus, even if incinerated in some supposedly humane fashion rather than left crying out in blind agony on the operating room floor, as was reportedly the case with one of Gosnell’s victims. I say blind because this second-trimester fetus did not yet have fully formed eyes. (Think about that one.)

So I don’t think I’m “pro-choice” anymore, but I’m not really “pro-life” either.  I would feel like a hypocrite. I don’t want to pretend to ideals I have serious doubts I would be able to uphold in a real-world situation.  If a woman in my family, or a close friend, were (Heaven forbid) impregnated through rape, I would undoubtedly support her right to abortion.  I might even advocate it.  I also have no idea how I would react if confronted by having to make a choice between the life of a fetus and his/her mother.  Just the thought makes my head spin.

And there it is. We are compromised. We see murder and we pretend not to. We call it something else. We treat it as magic, as though a first-trimester abortion mystically removes the unwanted-abstraction-which-is-not-alive-shut-up, transubstantiates the woman from “pregnant” to “not pregnant” and sends her heroically on her way. The death, the blood, the humanity-reduced-to-laboratory-specimens (I have seen them), we doublethink these messy realities away. And we tell our young (and ourselves, truth be told) that they may fornicate freely, without consequence, because “protection” exists, and if “protection” fails (or they fail “protection”) we have this Serious And Important Issue to Pontificate and Philosophize About, which will unmake the the consequence.